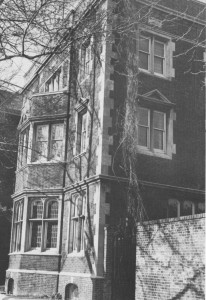 The Delta chapter was established in 1849 at Burlington College in Burlington, New Jersey, by Warren Livingston, Caleb Harrison, and the Reverend William C. Doane. The chapter transferred to the University of Pennsylvania in 1854 when Charles Littell and William Avery, who were brothers from Burlington, enrolled in graduate school at Penn. At the time, the Burlington College administration was taking strong measures against fraternities and the two classmates proposed the transfer to a new home at 32 South 22nd Street, which remained the home of the Delta chapter up until its move to West Philadelphia at the turn of the century.

Professors Brownlee and Thomas, in Building America’s First University, have noted that in 1888, Delta Psi was the first fraternity at Penn “to have its own purpose-built house, a Wilson Eyre, Jr.-designed palazzo on 22nd Street across the Schuylkill.” When it was opened in January 1889, it was known as St. Anthony Hall.

In 1907, the Philadelphia architectural firm of Cope and Stewardson designed a new house, 3637 Locust Walk. Penn’s Delta chapter is the second oldest active chapter among the ten chapters in existence. It is also one of only three all-male Delta Psi chapters nationally. In 2005, the National Landmark Society named the Hall a national historic landmark. The Delta chapter has enjoyed 166 continuous years of brotherhood, going through various wars and movements in American history.

St. Anthony Hall at the University of Pennsylvania • Copyright © 2020